The name ‘Dungiven’ is sometimes translated ‘Fort of the skins’, or alternatively ‘the pleasant mount’.

It is thought that St Columba visited this area in 590A.D. He may well have had an influence on its early Christian origins. The first mention of a church in the area is a reference to ‘the glen of the skins’ around 678A.D. In 1100A.D. an Augustinian Priory was founded by the O’Cahans.

To the monastery of Dungiven were sent for education the youth of both sexes from the noblest families. – Quote from Cannon Ford

Those who attended the priory were educated not only in academic subjects but also in the use of weaponry.

By the early 17th century the priory had fallen into disrepair. However, it was restored in 1613 and in the words of one writer ‘was used for Protestant worship’. 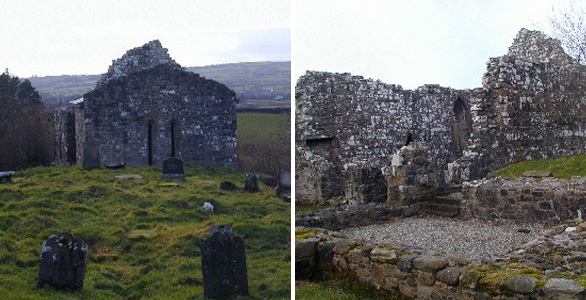 The chalice and paten from the priory remain in the possession of the parish.

The ruins of the priory may still be seen near Dungiven town. They are currently maintained by the Environment Heritage Service.

The first church on the current site was built in 1711 but by 1814 it had fallen into disrepair.

The worshippers used their sister-parish church at Banagher until the current Dungiven church was built in 1816 using stone from Altmover quarry.

The parish was separated from Banagher in 1850. The current grouping of Dungiven and Bovevagh was established in 1929.

Dungiven Parish Hall was built immediately beside the church in 1996 It replaced the Ogilby Hall which had been a school-house.

Mr Alan Keys has almost completed a comprehensive history of Dungiven Parish, due for publication later this year.  The Sunday school are developing a time capsule to bury in the church grounds as part of celebrating 200 years of the current church building.